We continue the sometimes joyful and sometimes painful path to try to be better human beings - this is only possible because we can rise above logic, that we find the wonder and hope, the language and words to inspire us and keep us going. Thanks for visiting.

Last night I did something which I regret - which is to stand on a soap box and deliver a polemic at the MIT club of northern california meeting where Open Courseware was seeking feedback from the alumni community.

As part of purging myself from the excruciating feeling that I did my cause no benefit by doing that, I would like to share the thought in a less polemical way - ie what I should have said.

OpenCourseware (OCW)   is MIT's open source platform for sharing course materials - 2100 courses to date from MIT, 20,000 courses on the platform put on by others Tufts, CMU, etc. There are mirror sites around the world, eg Sub Saharan Africa gets the stuff on hard drives so that Internet access is not needed for local tapping of OCW, Chinese translators create Chinese language versions and post them out, under CC license. In all, current estimated audience is 125 million globally. We have just reached the 10th anniversary of OCW, and the speaker's were former Dean of engineering, Dick Yue and the Executive director of OCW, Cecelia d'Olivera. There are 30 ebooks, each MIT course is the sharing of the equivalent of 1 MIT Professor's time on average, 1 year in preparing a new course. They take sabbaticals to create new courses - at least that's what they told us last night.

MITx is the parallel effort by MIT to actually offer free courses - where you can get an MITx Certificate.

The first course MITx on circuit design of some kind, has just completed. 150k people signed up. 9k took the mid term. 5k took the finals 7k passed (I guess you could pass without taking the finals, based on earlier work)

They asked us, several questions, the last of which What would be the impact of not moving forward boldly with OCW, they have a dream of reaching 1 billion people.

My response to this question:

OCW is like the Gutenberg Bible of our time (yes, its possibly a little bombastic, but I do think this - also am aware I'm talking Western Europe only) - before the printing press (analogy Internet) if you wanted to learn to read and write, you had to join a monastery and become a monk. There was a priesthood. Or you had to be very wealthy, and pay monks to teach your kids. Because churches were the only place where knowledge gardens were tended in those days, and they begot the small number of universities (Paris, Bologna, Scotland) - Wikipedia: "The first institutions generally considered to be universities were established in Italy, France, Spain and En
gland in the late 11th and the 12th centuries for the study of arts, law, medicine, and theology.[1] These univers
ities evolved from much older Christian cathedral schools and monastic schools."

The printing press broke the monopoly of the church and began the trend of the increasing literacy of the people. Cheaper books meant that literate people could teach anyone they wanted to, wherever and not make it a condition that you would devote your life to God in order to learn to read and write.

OCW opens the possibility that anyone with Internet access (big IF, but it was a big IF whether or not a Gutenberg bible was within walking distance to you) can "see, understand and learn" for themselves and decide for themselves what kind of life they might want to lead, how they might earn a living, how their community might operate. No longer does global fields of knowledge have to be interpreted by "haves" to "have nots".

Like the ABC of literacy, with OCW is the door to 21st century literacy, the genii is out of the bottle. People being people, they will get what they need and want, the most ambitious, strong minded ones first will break down the barriers for those that follow. It might take the Enlightenment, the equivalent of the American, industrial, information revolutions to occur, before all the things happen like every human having the chance to realize their potential to thrive and pursue happiness, but the dam has broke, it will not be put back again.

The next part I did not say last night, but I am sharing here:

What brought me to Douglas Engelbart and why I worked with him for 4 years was that I recognized that he knew that it could go the way of open source and human potential, OR be hijacked by monopolists and used to "enslave" the many to benefit the few powerful. And that the angst we feel, and mirrored around the world, is because we hover in the crucible until the needle points firmly in one direction or the other.

The powerful will always gather power, and drive to feudal society - because they live in a world that is static, a pie that is not growing.

The other view: Knowledge multiples when it is shared... a cut and come again pudding! The American experiment has shown that the opening the pursuit of happiness to all, can have generate collective knowledge with beneficial results for over 200 years. But as power entrenches, the tendency to shift back to feudal is threatening to overwhelm the American experiment (Citizens United is such an Orwellian term don't you think?)

With knowledge going global, which way will the needle go?

What you think and say matters: Mental Hygiene

We can get into a reactive mode where whatever happens draws our attention, and shapes what we say, do think and feel.  In that case, there is not sense of a higher meaning for life, and we just feel helpless and resigned to live within an exhaust cloud of disappointment and frustration. OR we can be energized by a sense of hope for a better future and find those like-minded people with whom we can focus our efforts on working together for something worthwhile. And that takes relationships with others, because all of us have good days and bad days and it takes a team to keep going forward.

The illustration is by Ping of Pingart based on narrative by Jonathan Peck of the Institute of Alternative Futures. 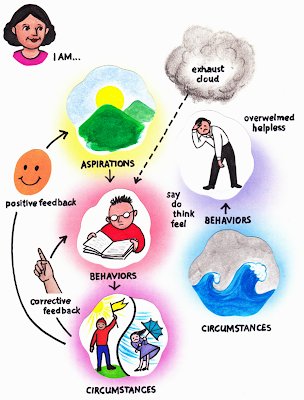 What Captures your Attention by Karen Anderson in the Harvard Business Review:

"Whatever we focus upon actually wires our neurons. For example, pessimistic people see setbacks and unhappy events as Personal (It's worst for me), Pervasive (Everything is now worse) and Permanent (It will always be this way) according to Learned Optimism author Marty Seligman. Yet, with practice, he found that we can learn to focus more attention on the positive possibilities in situations to then to craft a redemptive narrative of our life story. Consciously changing what you pay attention to can rewire your brain from a negative orientation to a positive one.

"Because attention is so closely connected to our brain's basic wiring, it can be difficult to recognize our own patterns of giving attention — patterns we've been absorbing since birth. Yet different cultures do allocate attention differently. For instance, psychologist Richard E. Nisbett showed an underwater scene to students in the U.S. and also to East Asians. While the Americans commented on the big fish swimming amongst smaller fish, the East Asians also discussed the overall scene, including plants and rocks. Nisbett concluded that East
Asians focus on relationships while Westerners tend to see isolated objects rather than the connections between them.

John Hagel reported on a similar experiment. "A developmental psychologist showed three pictures to children — a cow, a chicken and some grass. He asked children from America which two of the pictures belonged together. Most of them grouped the cow and chicken together because they were both objects in the same category of animals. Chinese children on the other hand tended to group the cow and grass together because 'cows eat grass' — they focused on the relationship between two objects rather than the objects themselves."

Thinking about this, its interesting that LANGUAGE itself can shape our attention. It is not just the cultural fact of living in East Asia, the Chinese character language forces paying attention to relationships.  In the written Chinese language, while words can be said to have a meaning, their meaning is not clear until the word is used within a sentence, when the relationship to the words around them then come into focus.

Thus knowing the words in a sentence but not seeing the context in which they are invoked, means that the relationships are not clear. Thus Chinese is called a "contextual" language. This is not to say that English is not, I find it depends on who is talking and how they use the language.

I find Abraham Lincoln's use of the English language particularly compelling because he is so able to use very simple everyday language to express thoughts that are clearly stated, and in fact he uses the relationships between the simple word to get us to see things in a new and fresh way.

We can succeed only by concert. It is not "can any of us imagine better?" but, "can we all do better?" The dogmas of the quiet past, are inadequate to the stormy present. The occasion is piled high with difficulty, and we must rise -- with the occasion. As our case is new, so we must think anew, and act anew.

Where others might use jargon to exclude, he uses simplicity to include. one example of this is Peter Norvig's version of the Gettysburg address which he has translated into 'powerpoint-ese"

George Orwell is one of the great 20th century proponents of clear English, following in a great tradition of Shakespeare - whose metaphors still shape our thoughts today.

Orwell "translated" Ecclesiastes 9:
11— in Politics and the English Language - as an example of the beauty and power of language

I returned and saw under the sun, that the race is not to the swift, nor the battle to the strong, neither yet bread to the wise, nor yet riches to men of understanding, nor yet favour to men of skill; but time and chance happeneth to them all.

—and then showed how it might be said in "modern English of the worst sort,"

Objective consideration of contemporary phenomena compels the conclusion that success or failure in competitive activities exhibits no tendency to be commensurate with innate capacity, but that a considerable element of the unpredictable must invariably be taken into account.

Our human brains shape our attention, yet what we choose to pay attention to shapes our brains. For those of us who write or speak, we can pay attention ourselves to what we call other's attention to. Is it to a better future where we can all do better?